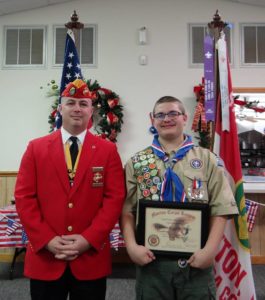 Eagle Scout William Eugene Betts currently holds the leadership position of Troop Guide for Boy Scout Troop 726 of Clayton, and when new younger Scouts join, his responsibility is to take them under his wing and show them the ropes all while being a mentor. He wants to become a Scoutmaster in the future as his way of giving back to the Troop and community.

For his Eagle Scout project, William built a footbridge at East Clayton Community Park on Glen Laurel Road for nature enthusiast to easily cross a ravine while hiking.

William is currently a junior at Corinth-Holders High School and is also taking online classes at Johnston Community College in Criminal Technology and wants to do some sort of protective service in the near future like law enforcement.

On Saturday, December 16, 2017 an Eagle Scout Ceremony was held for William at Branch Chapel Free Will Baptist Church on Highway 96 in Selma. During his ceremony, William was also presented the Eagle Scout Good Citizenship Award from Eagle Scout Coordinator Lewis W. Rice III on behalf of the Johnston County Marine Corps League Carry-On Detachment 1236.
William is the son of Keith and Mary Betts of Selma.